Looking at knee ligament injuries, the isolated ACL tear is the most common injury, followed by the isolated MCL injury and the combined ACL/MCL injury.

Looking at knee multi ligament injuries, the combined ACL/MCL tear is most common (around 70% ). In this group, lateral meniscus injuries are more common than medial meniscus tears.

Meniscal tears in ACL/LCL tears are less common. All other multi-ligament injury patterns have similar occurrence rates for chondral damage compared to ACL only group.

The MCL is around 11cm long and 1,5 cm wide. It consists of the superficial MCL (primary stabilizer) and a deep thick part, which is part of the capsule. There is also a deep oblique part which extends to the back of the knee. The MCL is connected to the Medial Meniscus. 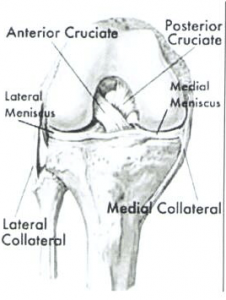 In case of combined ACL/MCL tears, there is a high incidence of knee stiffness. Shelbourne described that the risk of postoperative knee stiffness can be significantly reduced with pre-operative rehabilitation. In Grade I and II, knee instability is usually not a problem.  The MCL does almost always heal. Because of this, there is a trend to treat these combined low grade MCL injuries non- operatively.

This usually involves protecting the knee in a splint until the MCL is healed . The ACL surgery can go ahead as long as there is no significant knee stiffness.

Even in Grade III tears, non-operative treatment of the MCL is possible. In those cases, the MCL needs to be strictly protected in a splint for 6 weeks. In the case of a tibial avulsion of the MCL, this can be repaired with a ligament staple at the time of MCL reconstruction . 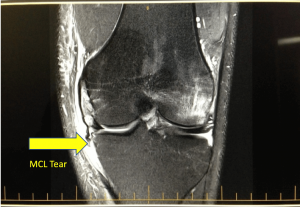 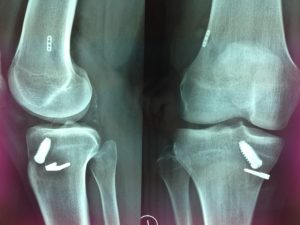 In cases that involve complete mid-substance MCL tears in particular when combined with PCL tears the MCL can be reconstructed with a 4x Hamstring tendon graft. 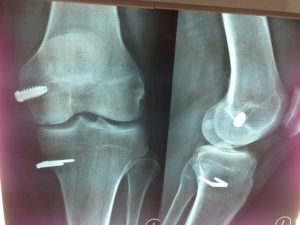 This is a very uncommon injury usually resulting from high or low velocity disclocations, which are commonly combined with MCL or LCL injuries.

Initial treatment:  Reduction, check for vascular and nerve damage. In case of vascular damage this needs to be repaired first.

There are controversies about surgical timing. Early (2-3weeks) ACL/PCL reconstruction/repair seems to produce better results. Technique, graft selection and rehabilitation have to be individualised for each patient. 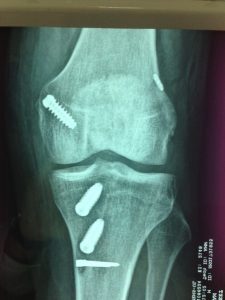 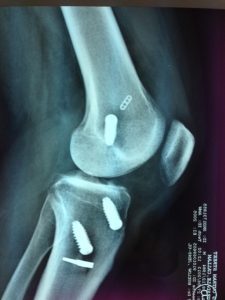 The LCL forms a strong connection between lateral epicondyle and the head of Fibula.

It resists varus stress, and is normally tight between 0 and 30 degress of knee flexion. It is normally looser when the knee is flexed more than 30 degress. The LCL is not connected to the lateral meniscus.

Grade I and Grade II tears are usually treated in a splint (similar to low grade MCL tears). As long as there is no knee stiffness, an isolated ACL reconstruction can be performed if examination under anaesthetic confirms that there is not varus laxity with the knee is fully extended.

Postoperative rehabilitation is individualised (possibly hinged knee brace for first 6 weeks), but most common would be rehabilitation as per isolated ACL reconstruction.

Combined Grade III injuries to PCL and PLC or ACL/LCL are best treated with cruciate ligament reconstruction which is combined with an LCL reconstruction .

The aim is to reconstruct the 3 main functional components of the PLC (Postero Lateral Corner): LCL, popliteo fibular ligament and popliteus tendon.

I usually use two small transverse incisions at the lateral aspect of the knee for this type of surgery: 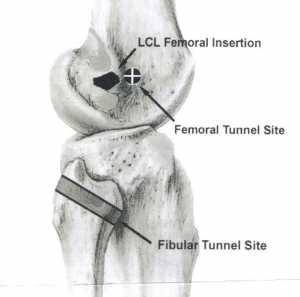 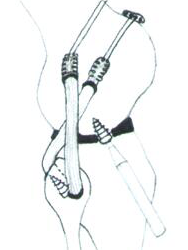 Postoperative Rehabilitation is individualised (possibly hinged knee brace for first 6 weeks), but most common would be rehabilitation as per isolated ACL reconstruction.